Consistently praised for his intense musicality and impressive technique, Canadian violinist Terence Tam has performed in Canada, the U.S.A, Australia, Europe and Japan as a recitalist and chamber musician.

He has also appeared as a soloist with orchestras in Europe, Australia and across Canada including the Montreal Symphony Orchestra, the Toronto Symphony Orchestra, the National Arts Centre Orchestra, the Victoria Symphony and Symphony Nova Scotia. His performances have been heard on Canadian and Australian national radio and television. Tam made his New York debut at Carnegie Recital Hall in 1994 and his Paris concerto debut in 2000 playing the Ligeti violin concerto with the Academy of 20th Century Music Orchestra.  His CD recording of Dutch composer Wim Zwaag’s violin concerto was chosen as one of CBC In Concert’s best classical recordings of 2011.
Currently concertmaster of the Victoria Symphony, he also previously held this prestigious position with the Adelaide Symphony Orchestra in Australia and Symphony Nova Scotia in Canada. An active chamber musician, Tam’s performances have taken him to the Sarasota, Ravinia, Meadowmount, Banff, Aspen, Encore, Hamptons, Scotiafest and La Conner music festivals. He has collaborated with musicians from the Juilliard, St. Lawrence, Ying and Pacifica string quartets. In recent seasons he has been featured as guest violinist at the Montreal Symphony’s ‘La Viree Musique’ festival, the Sweetwater Festival in Ontario, Music in the Morning in Vancouver, the New Brunswick Summer Music Festival, the St. Cecilia Concert Series in Halifax, the 35th International Viola Congress in Australia and at the Eine Kleine Summer Music Festival in Victoria.

Tam studied at the Glenn Gould School of Music Toronto where he completed a double major with full scholarships in violin and piano. Subsequently, he pursued post-graduate studies at the Peabody Institute of Music in Baltimore as well as the Hochschule fur Musik “Hanns Eisler” in Berlin, Germany.

Tam regulary gives masterclasses and chamber music coachings across Canada.  He is a faculty member of the annual summer Symphonic Orchestra Academy of the Pacific in British Columbia and has also taught at the Elder School of Music at the University of Adelaide. 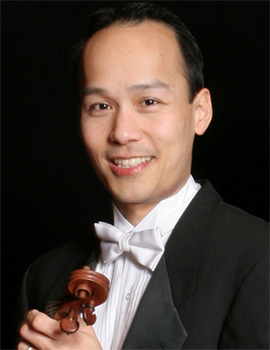